Back to All Stories
Next Story
Previous Story

For such a simple concept, the effect that COPE Galway Community Catering Meals on Wheels has on the lives of clients can be far-reaching. By delivering a healthy dinner to the door of older people unable to cook for themselves, Community Catering allows older people the freedom to remain in their own homes, and independent, for longer than they otherwise could. 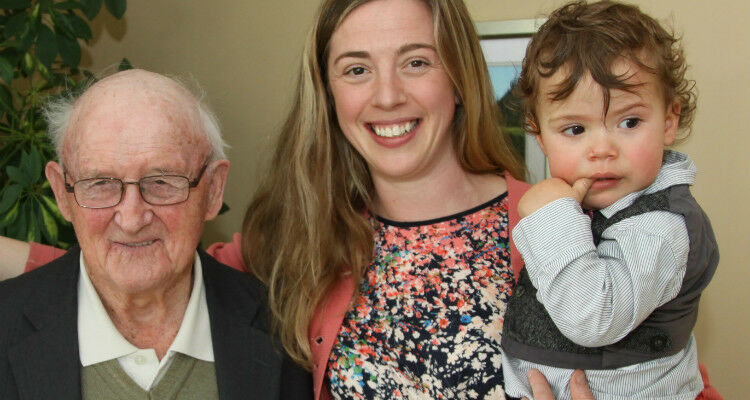 The 21st century version of the traditional Meals on Wheels service, COPE Galway Community Catering, is all about providing quality, delicious and nutritious meals, and social contact for Galway’s older community.

In his 90s, Peter Finn has been getting Meals-on-Wheels for the past six years. Peter’s wife, Mary, sadly passed away seven years ago. Mary, whom Peter describes as having been a wonderful home-maker, had always cooked for them both. Being on his own, he found cooking for himself challenging as time went on.

A farmer from Oranmore, Peter was used to being out and about on the farm, spending his time tending to his cattle.

With eight children, six living in Galway, 27 grandchildren and seven great grandchildren, Peter is never short of company, but was delighted when a neighbour told him about Community Catering six years ago.

“I was cooking for myself for a year or so, and while it was OK, it was also a lot of trouble, cooking for just one person. You had to get the vegetables ready, do the cooking, clean the saucepans.”

Peter has a meal delivered to him five days a week. Each Friday, two meals are delivered – one for Friday and another for Saturday, and on Sundays, Peter goes out to eat with one of his children.

“The driver leaves it in the fridge so if I’m not at home, he can just leave it there. He usually comes at about 12 o’clock. It’s very handy; I just heat it up in the microwave when I choose to eat my dinner.

The food is good; vegetables and fish one or two days a week, chicken another day, beef another. Then maybe ham or pork the next day.”

For Peter, that daily delivery makes a big difference to his days. “I’m a lot less steady on my feet now than I was six years ago, so whatever chance I had of cooking then, it is not possible now,” he adds.

For Peter’s children, knowing he’s having a good meal every day must also be reassuring, and while one of his children stays with him each night, the cooking is something that would prove to be a challenge were it not for Community Catering.

“My children thought it was a great idea. They like the fact that I get my meals delivered to the door; it would be difficult to organise it any other way. It’s important to have a decent meal sometime in the day.”

Peter published a book – Memoirs of Peter Finn – which documents his life as a farmer, and the practices used by farmers in the West of Ireland when he was a young boy and man growing up in Maree.

Grateful for the service provided to him over the last number of years, Peter decided to offer the proceeds of the sale of the book – €2,400 – to COPE Galway.

“COPE Galway has been good to me. I’m very grateful, and was happy to offer the profit as a ‘thank you’.”

COPE Galway is very appreciative of this kind gesture from Peter.

We’ll send you news and stories from our services, and our fundraising, events and opportunities to support us. You can unsubscribe at any time. Read our privacy policy.

This website uses cookies to improve your experience while you navigate through the website. Out of these cookies, the cookies that are categorized as necessary are stored on your browser as they are essential for the working of basic functionalities of the website. We also use third-party cookies that help us analyze and understand how you use this website. These cookies will be stored in your browser only with your consent. You also have the option to opt-in/out of these cookies. But opting out of some of these cookies may have an effect on your browsing experience.
Necessary Always Enabled
Necessary cookies are absolutely essential for the website to function properly. This category only includes cookies that ensures basic functionalities and security features of the website. These cookies do not store any personal information.
Social Media Content
These cookies may be set by social media embedded content such as YouTube, Facebook, Instagram or Twitter. They may be used by those companies to build a profile of your interests and show you relevant adverts on other sites. These cookies track visitors across websites and collect information to provide customized ads.
Analytics
We use Analytical cookies to understand how visitors interact with our website. These cookies help provide information on metrics the number of visitors, bounce rate, traffic sources and how users interact with web pages. We use Google Analytics and Facebook Analytics to help us improve user’s experience on our website.
Advertisement
Advertisement cookies are used to provide visitors with relevant ads and marketing campaigns. These cookies track visitors across websites and collect information to provide customized ads.
Preferences
Preference cookies are used to store user preferences to provide content that is customized and convenient for the users, like the language of the website or the location of the visitor.
Other
Other uncategorized cookies are those that are being analyzed and have not been classified into a category as yet.
Save & Accept